A week ago the moon passed thru the Aries portion of the zodiac where she tackled the complications that arise from Jupiter, Chiron, Mars, and Eris in Aries as well. 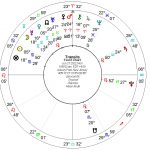 But!  Mars is pretty fiery & hot and so close now to Eris that I fear we’re about to see a lot of firewords until July 6 when Mars, having exhausted himself, as is his nature, rests for a bit in Taurus.  Mars customarily spends about 6 weeks in a zodiac sign.  That’s the normal rhythm of the universe for him.  However, because of retrograde motion Mars will be in Gemini for  (August 21, 2022 – March 26, 2023)  SEVEN MONTHS!  OMG!    FYI   (This is important for those of us who will participate in Beyond Words

For now, remember to take note of what’s happening  in your life around August 21, when Mars crawls from Taurus into Gemini.   Mars will return nearly to this point in time  during his backward motion of this seven-month (yipes!!) retrograde journey.   Mars rules Scorpio as well as Aries, so both those sun sign will feel the slow down motion most, perhaps?    The retrograde period begins late October and lasts until Jan, 2023.  That’s 2 solid months of backward motion in Gemini.  It isn’t until Spring, 2023 before he reaches the 26th degree from where the Rx began.

Eris & Mars form a conjunction on June 27 at 24 degrees of Aries.  The God of War meets The Goddess of War in Aries.  Volumes will be written of the events that will continue until at least 2025.

more later……………   much to discuss, ponder, and contemplate..