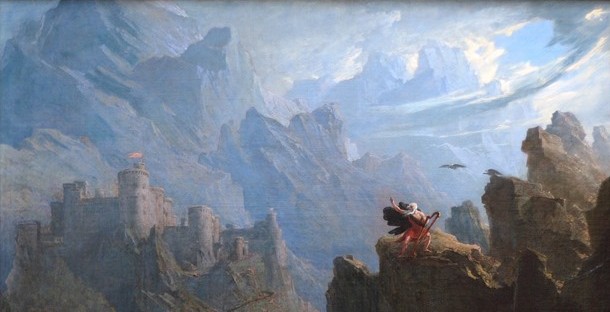 my story for Tellebration 2014 and excited to present it.  I’ll be telling more about Dagda  and adding a nice bit of harping to the telling. Dagda is the god of the bards and his lineage connects him to the fairy realm of Ireland.  He’s a comical figure, visually, but still immensely powerful.  His primary tool for the magic he weaves is his harp.  Besides composing the sounds of nature, and keeping the seasons in order, he’s also credited with the establishment of the Three Noble Strains, lament, merriment, & lullabye.    I have lots of ‘merriment’ & ‘lullabye’ in my repetoire, however I did not have any ‘lament’s or sad songs.  I guess that means I don’t qualify as a bard……yet.  So, I’ve been searching for sad across the internet and settled in on T.  O’Carolan’s,  Clergy’s Lamentation.

It takes a lot to learn a new piece so I’ve been carrying this tune around in my head for days.  It is a sad tune…..  unless I play it fast, and then it’s positively danceable.  And so it goes.  I did some googling around though and found these 2 articles.  You might want to check them out.

Oh! and, Venus moves into Sagittarius just as our show begins….isn’t that just perfect.